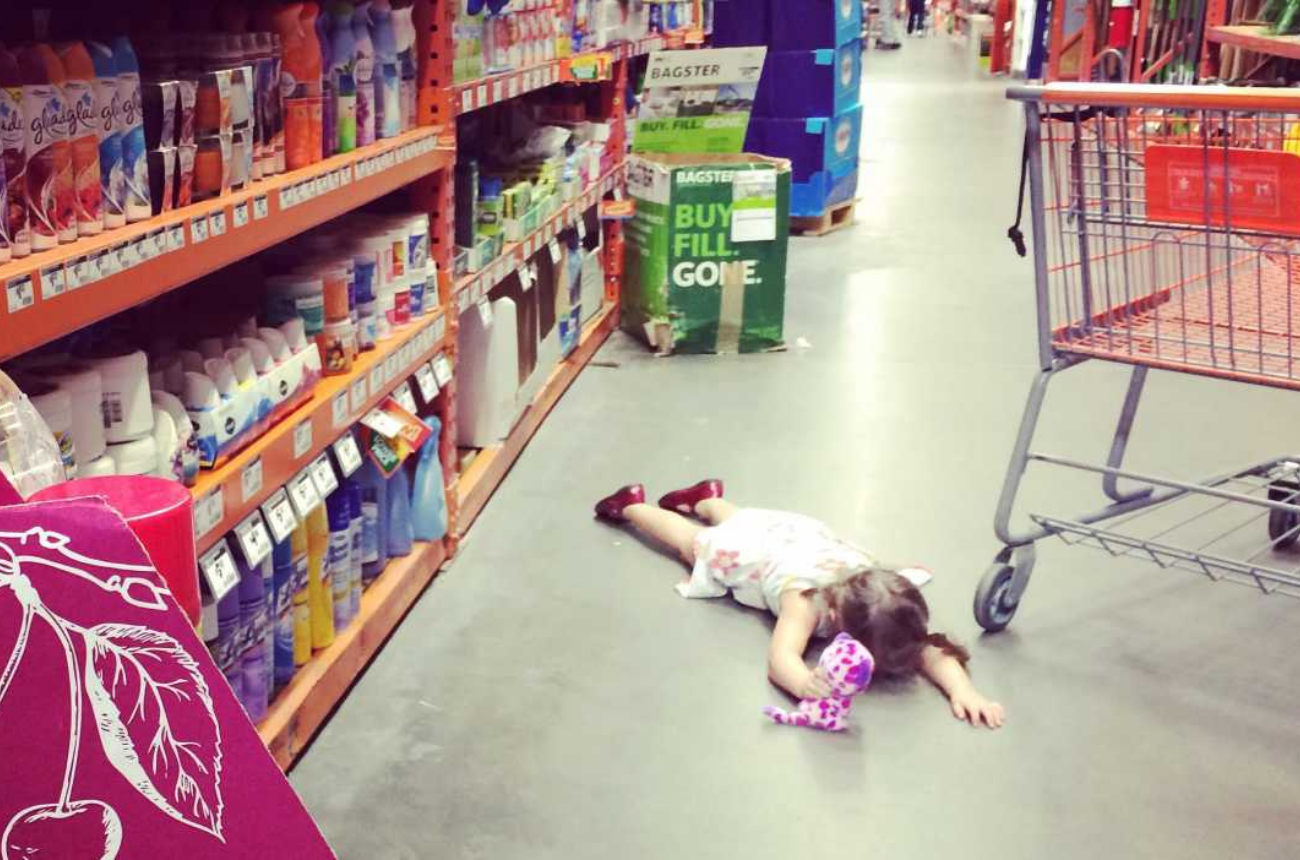 Throughout the pandemic, I’ve made it a general rule to take my weekly trip to the grocery store alone. Partly, I figure it’s a simple way to limit our family’s opportunity of exposure to the virus. But to be honest, the main reason is because I can. As any mama of littles knows, a grocery run is considerably less complicated when unaccompanied by those “gimme!” little hands, so I count my husband’s presence in his home office as one of the pandemic’s few upsides.

On a recent Monday morning, I wasn’t so fortunate.

So, I piled my six-year old daughter and four-year old son into the car and headed down the hill to our unsuspecting neighborhood Andronico’s. I plopped my son into the child seat in the cart, and my daughter helped me roll through the aisles collecting what we needed.

It was all going pretty well, I thought, considering I hadn’t taken the kids to the market for the better part of a year. I began to revel inwardly in my obvious skills as a Supermom.

As we approached the register, my daughter spotted an enormous unicorn in the Valentine's Day display. I quietly cursed the marketing department for their apparent hostility towards moms everywhere, gently shut down her hopes and dreams for the day, and braced myself for the ensuing big girl tantrum.
By the time I arrived at the register, I was putting on a wonderful show of pretending I was immune to my protege’s incessant whining. I made conversation with the man at checkout. I smiled through my gritted teeth. I finished paying and hightailed it out of there, figuring that if my kids had made a bit of a show of themselves, I, at least, had maintained my composure.

On the way out, we made a stop at the coffee stand for a latte and a compensatory kids’ hot chocolate. When my generosity was met with more whining and yet another conversation about giant unicorns, that composure started to slip. Unhelpful mom phrases like, “You stop that right now,” and more than one threateningly whispered, “Cut it out” started escaping from my lips.

Suddenly, in the midst of her frustration and plain old six-year-old lack of foresight, my daughter exasperatedly hung the whole weight of her body on the side of the cart. As if in slow motion, I helplessly watched the cart begin to tip like a sinking ship. My son let out a high-pitched scream as he fell forward to the floor, his feet crushed under the weight of the groceries.

As I dragged his wailing, (thankfully uninjured) body out from under the cart in front of that poor Peet’s coffee guy, something inside me snapped. The ten minutes that followed were some of the lowest in my mom life.

I let those kids have it.

All of their past failings as human beings roared out of me in a magnificent display of childish awfulness. They both sobbed. They yelled at me for being a mean mama. They were drenched with the shame I poured onto them.

I stomped up the stairs into the kitchen, heaving my groceries, and began to huffily put them away, mumbling under my breath, while my daughter ran into her room and slammed the door like a teenager.

And then, something happened. I heard my son’s little four-year old voice underfoot.

“You made Reagan sad.”

“But you don’t have to yell at Reagan.”

Leave it to the four-year-old to offer the simplest wisdom.

In that moment, something clicked back into place. Guilt flooded my system, and I strode straight to my daughter’s bedroom door and swung it open. I pulled her sobbing body into my lap, and I choked back tears as I told her how sorry I was. I told her that no matter how upset I felt, I should never have yelled at her like that.

That sweet girl snuggled her face into my chest, put her arms around me, and said, “It’s okay, Mama.”

And it really was.

There was no shaming, no residual anger, no disconnection. The only thing she wanted was to be back in my arms, reconnected to her mama.

Now, my children are as far from being God as the rest of us. But that morning, I couldn’t shake the sense that I had just glimpsed the beautiful grace of God.

My daughter and I are both broken human beings.

God, on the other hand, is the almighty, powerful Creator of the Universe. And yet…

If we confess our sins, he is faithful and just to forgive us our sins and to cleanse us from all unrighteousness. Ephesians 1:7

Just like that. No shame. No residual anger. Only the reconciling power of the love of Jesus.

And you were dead in the trespasses and sin in which you once walked, following the course of this world, following the prince of the power of the air, the spirit that is now at work in the sons of disobedience-- among whom we all once lived in the passions of our flesh, carrying out the desires of the body and the mind, and were by nature children of wrath, like the rest of mankind. But God, being rich in mercy, because of the great love with which he loved us, even when we were dead in our trespasses, made us alive together with Christ--by grace you have been saved. Ephesians 2:1:22

All of us will fail--often--in this life. Romans 3:23 says that, “all have sinned and fall short of the glory of God.”

Yet in the very next verse, Romans 3:24 says we are all justified freely by his grace through the redemption that came by Christ Jesus.

Today, let us rest in that grace. And may it propel us to extend that same grace to our broken world.